This an event article, used for writing about and listing the events planned for the future of your website. You can edit all of this text from the Pages tab by clicking the edit button. 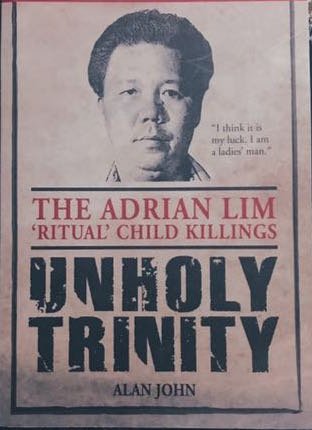 Despite his execution, only a few people got to know Adrian Lim as most were scared off by his diabolic reputation of 'supernatural powers'...
One person who did get up close and personal was investigator, speaker and ex-Assistant Superintendent in the Singapore Police Force, Simon Suppiah, who will reveal in his SG Underground talk for the first time ever some of the discussions he had with Adrian in understanding his dark pathological personality.

Adrian Lim, possibly the most reviled criminal in the history of Singapore, was a master manipulator, deviant and thoroughly evil man. Over just a span of 2 weeks in 1981, he instructed members of his 'family' to commit 2 horrific murders in his Toa Payoh apartment and then, drinking the blood of his victims, 9 & 10 years old. In 1988, he was sent to the gallows along with his 2 'holy' wives, never to be seen again.

Simon Suppiah is a familiar household name in the local crime fighting scene. Having experienced a police career covering over three decades, in his own words, he has seen things, no person deserved to see from the darker side of humanity. His involvement as a police investigator in the early years puts him in the most sensational cases dubbing him the 'Sherlock Holmes' of Singapore. From shoot-outs to almost being run over by cars, this man had missed death on far too many occasions, bagging him numerous awards and certificates of Commendation and High Commendation from SPF. He was also awarded the prestigious National Day award, The Efficiency Medal for his exemplary investigative abilities.

See him on the streets today and you would never had guessed this 70 year old badass have had more actions & drama than Tom Cruise in his hollywood career. Hear from the OG himself at this 'must see' SG Underground talk and gain insight into the dark world of Adrian Lim.